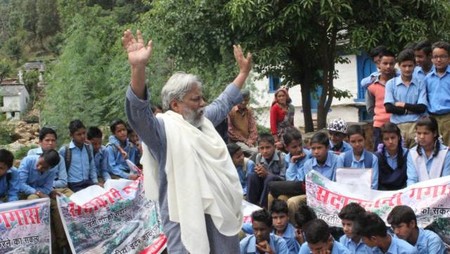 The ‘Sadabahani Gagas’ campaign – an Amar Ujala Foundation initiative had been flagged off at Almora on 22nd May, 2017. The 10-km awareness walk started from the Garg Muni Ashram in Kukuchina. The flow of perennial Gagas river has decreased drastically over the last decade. Well-known environmentalist and Magsaysay awardee Rajendra Singh also participated in the initiative. Renowned social activist Radha Behan and environmentalist Padm Shree Dr. Anil Joshi also participated in the Gagas Pad-Yatra to motivate local population. The Gagas river, in Almora district of Uttarakhand, spans 14 major gadheras (streams) on both banks, and its river basin comprises over 500 sq. km with a population of over 1,20,000 spread in 350 villages. The aim of the campaign is to instill awareness among the locals and teach them ways to save the river from drying up. Environmentalist Rajendra Singh also educated villages about the conservation of water resources, its importance in maintaining the ecological balance in the villages of Dunagiri and Nayal. He also emphasized that in order to save the rivers, conservation efforts are needed – one gadhera at a time. The two important steps, according to Rajendra Singh, are conservation of the water with the help of rainwater harvesting and secondly, proper utilization of the water.
Environment: संबंधित ख़बरे