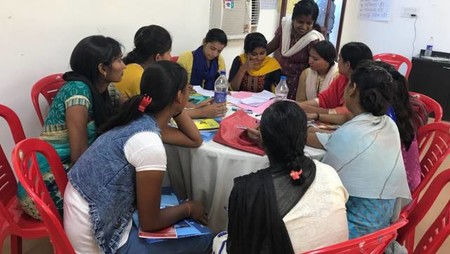 New dimensions explored for Media Sensitization on Child Marriages. Beginning with UNICEF Rajasthan few years back, AUF has recently started a different kind of empowerment campaign in collaboration with UNICEF UP in two districts of Balrampur and Shrawasti where percentage of child marriage has been the highest. Google is also participating in the campaign and has provided mobile phones to 150 Internet Sathis (IS) who have been trained in Video reporting skills. These IS would send Positive Deviant video stories from their surrounding villages and these would be showcased on the Amar Ujala Website. This campaign aims to strengthen the positive energy against Child Marriage in a way that empowers and educates the society deeply and irrevocably.

Prior to this, UNICEF Rajasthan and Amar Ujala Foundation joined hands to stress on responsible reporting on Child Marriage. This pilot project was embarked upon keeping in mind the urgent need of informed reporting by local stringers. The project aimed to establish a single point access through a blog/website for authenticated child marriage information, awareness and elimination of misconceptions.